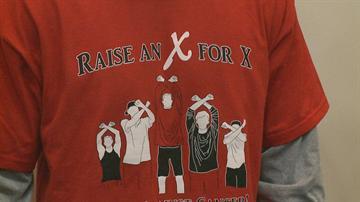 NOTRE DAME, Ind. – Fifth year Notre Dame Student and football intern, Xavier Murphy, lost his battle to leukemia on Tuesday, Oct. 11. Murphy, also known as “X”, had a short battle with the disease, dying exactly one month after being diagnosed. Now the campus of Notre Dame is coming together to remember the 22-year-old.

“He was with us every day, you know, always a great person to be around, willing to do anything for you, always had a smile on his face, cracking jokes, he’ll definitely be terribly missed,” said Irish Center Braxston Cave.

Murphy was a senior manager for the football team in 2010 and an intern for the team this season.
The team is already sporting green shamrock decals with a black “X” on their new helmets to remember Murphy.
“He’s somebody that we’re not going to forget, and we’ll always remember what he meant to us,” said Irish Safety Harrison Smith.
Murphy didn’t just leave his mark on the field, he also made a big impression on the students he lived with at Zahm Hall.
“Just a really nice kid and obviously really hard worker,” said Brendan Corsones.
Now the students who live in Zahm Hall are working hard to remember Murphy. The dorm is selling red shirts and bandannas to raise money for Murphy’s family and cancer research.
“This is a good time to show what we’re made of and ban together around Xavier, even if you didn’t personally know him,” said Corsones.
Those that knew Murphy didn’t call him Xavier, but “X”. At this weekend’s game against Navy, students want to honor his memory by crossing their arms in the air.
"We're calling it raise an “X” for “X”. We're hoping during the first quarter of the Navy game this Saturday we're going to get the student body to throw up an “X” for “X”,” said Corsones.
There will be a moment of silence before this weekend’s game against Navy on Saturday, which would’ve been Murphy’s 23rd birthday. Murphy’s family is planning on coming to the game.
Students will be selling shirts and bandannas at a concession stand on the quad in front of the Basilica, right in front of Sorin Hall on Saturday. You can also buy them online.
Murphy earned his bachelor’s degree in political science and was finishing one course and working as a football intern this semester.
Share this article: