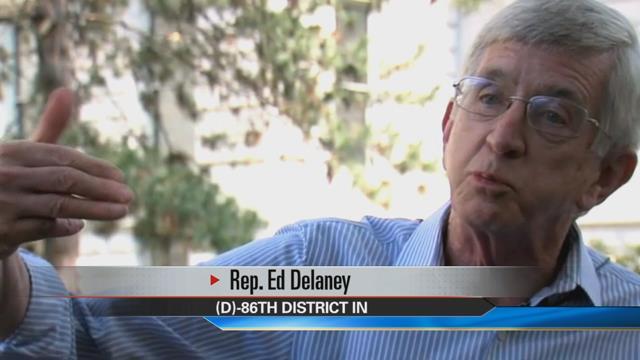 On June 21, in Washington, D.C., lawmakers considered four measures aimed at making sure terrorist suspects don't get their hands on guns.

Two of the measures were introduced by Democrats and would have stopped sales of firearms to people on the FBI’s terrorist watch list and require a background check for every gun buyer.

The other two measures, proposed by Republicans would have required the government to prove it had probable cause to block a gun sale and require increased funding to perform background checks.

U.S. Democratic Senator Joe Donnelly of Indiana was the only member of the Senate to vote yes on all four measures.

Indiana's Republican Senator Dan Coats supported only two of the measures. Coats did not support the measures introduced by Democrats.

None of the measures passed.

Amidst that vote in the Senate Tuesday, an openly frustrated Democratic State Representative Ed Delaney called a press conference to tell constituents why he believes guns laws do not change in the state of Indiana. He says it comes down to fear, but not necessarily fear of guns.

“The Republicans are afraid that they're gonna lose some votes in a primary. Well, they gotta choose between death and the primary, okay? It's really that simple. So far they've made the choice that winning their primary is what matters,” Delaney remarked.

Rep. Delaney spoke passionately about the case of the Indiana man arrested earlier this month in Los Angeles for illegal possession of weapons.

James Wesley Howell had an ongoing host of legal issues including child molestation charges filed against him May 31, 2016.

After being questioned by authorities on June 7, Howell left Indiana and resurfaced in California on the day of the Los Angeles gay pride parade.

Police arrested Howell after reports of a prowler led to a search of Howell’s car where illegal weapons were found.

A timeline given to ABC 57 News by Rep. Delaney’s office, details the substantial arsenal of weapons found in Howell’s car.

“In the case of James Wesley Howell, we utterly failed to enforce our very weak laws. We need to first start enforcing the laws that we have and then get serious come January about having some real gun legislation,” remarked Rep. Delaney.

He went on to say that 80 percent of American people believe we should restrict automatic weapons, large ammunition clips and have universal background checks for gun sales.

He continued that a majority of the NRA members agreed as well.

“Somehow that can't seem to get through to politicians. It got through to this politician! I think I understand this issue,” Rep. Delaney emphatically went on.

As far as he’s concerned, it all comes down to a matter of money and fear. Rep. Delaney told us there are gun manufacturers making billions of dollars by selling weapons to the world and our country and that they were going to people who “didn’t need them for purposes that are illegal and immoral.”

He says the NRA scares politicians into voting with them and that Republicans are simply afraid of losing votes in the primary. Rep. Delaney noted that Howell was supportive of the NRA.