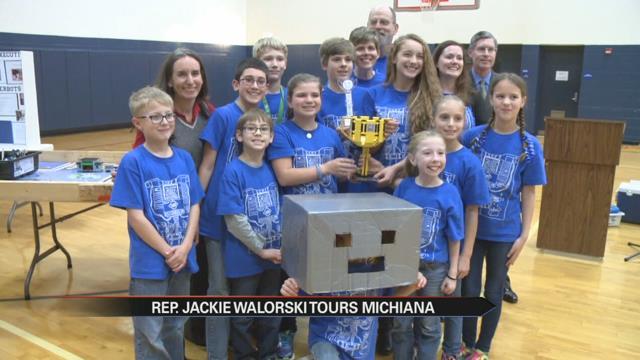 Congresswoman Jackie Walorski made several stops in Michiana Tuesday as part of her Who's Who in IN-02 tour.

Congresswoman Walorski started her day in Rochester at the pharmacy owned by Harry. She honored Webb's work with the Citizen's Action Committee, which partners with local and state officials and pharmacies to reduce the sales of pseudoephedrine, the active ingredient in meth.
At 10 a.m. Representative Walorski went to the Rochester Fire Department to honor volunteer firefighter David Lawson, who saved a family from their burning home.

"I think that David's courage and that willingness to, you know, you could have just looked the other way.  But that willingness to get out of his car, go in there and save folks is just a heroic attempt. I just think it points to all the first responders in our state," said Representative Walorski.

Just after 11 a.m., the Congresswoman went to the SCILL Center in Knox to recognize Ron Gifford for his work to create a trained and skilled workforce for northern Indiana.

At noon, she went to the South LaPorte County Special Education Cooperative to honor Director Paula Nichols. Walorski honored Nichols for her work to provide services to students with disabilities.

Her day in Michiana wrapped up in Mishawaka at Beiger Elementary School. The Beiger Bots Team was honored for winning their first Lego League State Championship.