Repeating history; Indiana is a Right to Work state, again 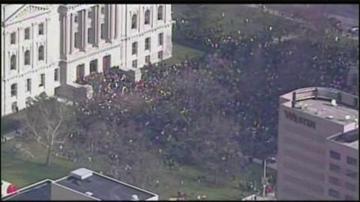 SOUTH BEND, Ind. – Fifty-five years ago, state lawmakers were striking Indiana’s right to work law out of the books; today they put it back in. How long it stays there is anyone’s guess.

Even as the ink was drying on Governor Daniels signature, demonstrators were on the steps of the statehouse.

Most of them were union workers upset that the Republican held legislature passed a right to work bill, and that Daniels was signing it. Many of them chanted, “we vote… we remember.”

Thousands of people marched through the streets of Indianapolis to Lucas Oil Field toting signs reading stop the war on workers, solidarity, and collective bargaining works for my family, among others.

This is not the first time Indiana has been a right to work state.

In 1957 Indiana became the 18 state to have such a law. The public outcry over its passage was intense.

Voters protested in the streets of Indianapolis, much like union members did Wednesday, but their voices were heard loudest at the polling booths.

By 1965 Democrats had wrested control of the legislature back, and the law was repealed.

Today, union leaders are hopeful they will once again rally their members to repeat that feat.

They already have their eyes on the November General Election.

And as they begin to motivate their membership to vote for candidates that are anti-right to work, they do so without prejudice to party affiliation. “I’ll vote for an independent, republican, the democrat, the person that will get rid of this is the person I want,” said Robert Warnock, Jr. former president of the North Central Indiana AFL-CIO Council.

Warnock’s father was a union member, as are several of his children. He plans to continue volunteering his time toward helping union causes.

He says educating the public, especially union members, of the facts about right to work; how it works and; the implications it poses; is the first step toward getting rid of it.