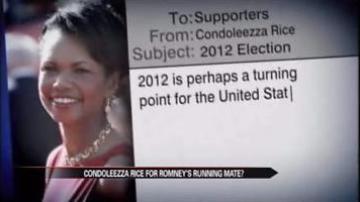 She got her master’s degree at the University of Notre Dame and played a significant role in the Bush Administration.

According to the Conservative website Drudge Report, former Secretary of State Condoleezza Rice is a top choice as a VP candidate. So far there’s been no comment from the Romney campaign.

Rice has openly and repeatedly said she doesn't want the job, but the website got a copy of an email she sent to supporters.

It reads: “2012 is perhaps a turning point for the United States. The upcoming elections loom as one of the most important in my lifetime.”

On top of the email, Romney's wife has told other media outlets that the VP candidate could be a woman.

Drudge has appeared to support the Romney campaign for awhile now and there are ties between the site's founder and Romney staffers.

Rice is now a professor at Stanford University. According to her spokesperson, she's on vacation this weekend.