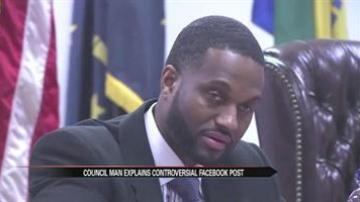 SOUTH BEND, Ind. -- In the investigative report about the controversial post South Bend Council member Henry Davis Jr made on his Facebook page, Davis explains his reasoning for the post.

The report was made by the council attorney for the Common Council Rules Committee.

Included in the 50 page report are the nine complaints against Davis as well as his reasoning for posting the photo of the man engaging in inappropriate activity with a dog.

In the report, Davis says he was watching television shows on his DVR and they contained material he felt should not be on television.

He says he watched the Grammy Awards and Beyonce was practically having sex with a chair. He said then, Queen Latifah, conducted a marriage ceremony for people with alternative lifestyles.

Davis said that he was bothered by the over-sexualized material displayed in front of other people, forcing new cultures on others.

That's when Davis went online and found the "crazy" article he posted. He said he was concerned about all of the sexualized material that was seemingly everywhere and wanted to know others' opinions.

We reached out to Davis to see if he could further explain his reasoning, but he has not returned our calls.

We also reached out to other members of the city council but they said the council attorney discouraged them from discussing the investigation until it is complete.

The Indiana State Police have not finished their investigation, but will provide an update soon.