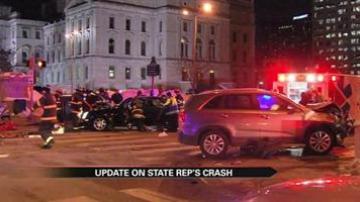 SOUTH BEND, Ind. -- Indiana Representative David Niezgodski and his daughter were hurt in a car accident around 7 p.m. Thursday in Indianapolis. Niezgodski is a lifelong South Bend resident and his friends say they are thankful he is doing well.

Niezgoski served on the St. Joseph County Board of Commissioners and County Council before being elected to the state house.

He grew up in South Bend and attended LaSalle High School. His family also owns a plumbing business in town.

"My heart sank when I heard about the accident, especially early on it was really frightening because we didn't know what kind of shape they were in," said South Bend Mayor Pete Buttigieg.

The mayor has worked with Niezgodski for several years.

Niezgodski released a statement Friday and said he suffered a broken rib and re-injured his neck. He said his daughter only suffered a concussion and was released from the hospital Thursday night.

Many of Niezgodksi's friends and constituents are breathing a sigh of relief.

"He is the kind of person who wants to know what everybody thinks, really likes to bring people together and that's why South Bend needs him healthy and well and back up and running in Indianapolis representing us right now," said Buttigieg.

Randy Przybysz has been a friend of the family for more than fifty years.

"Hearing about it last night, it was very scary. So finding out this morning that things are working out that they didn't have the kind of injuries that they expected at first, was relief. I think it was a relief for everybody that knows him and I am just very happy for David, for Rachael, and his entire family," said Przybysz.