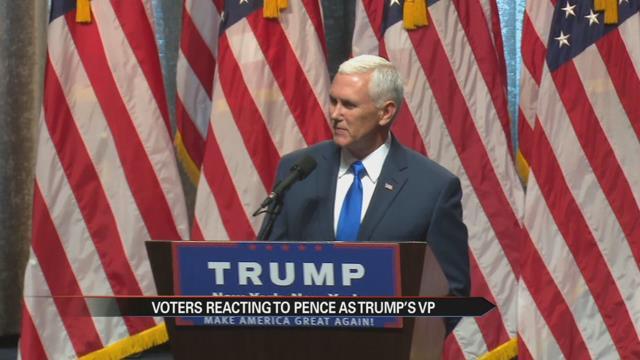 Saturday was the first joint public appearance for Donald Trump and Mike Pence since the former broke the news yesterday afternoon over Twitter.

That tweet had many people divided online about the pairing, but Trump’s supporters say Pence will be the key to uniting the party.

After Saturday’s press conference in Manhattan, many republicans felt there is hope for one Hoosier.

“I think he could help hold down the republican base while Donald Trump is out winning the votes of democrats, independents and millennials,” said Roger Stone, former campaign adviser for Donald Trump.

Indiana governor Mike Pence was miles away from his home state and was a new face in front of the big city crowd at the press conference.

But still, many felt he was confident enough to win over a few naysayers in the audience.

“I was overcome, I was proved wrong I really think that Mike Pence is the most qualified vice presidential candidate that there is in the United States of America,” said voter Max Bachmeier.

Trump supporters hope Pence’s favor will bring the GOP back together.

While others including Trump’s former adviser are just confident the duo will shake up the white house.

“Here’s a man who’s prepared to be president if anything god forbid should happen to trump, somebody who would carry the trump agenda forward,” said Stone.