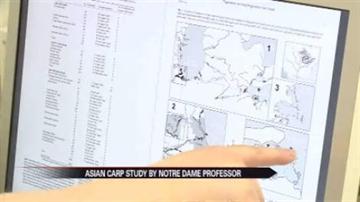 A study just released by a Notre Dame professor found traces of an invasive fish, the Asian Carp, in the Great Lakes. It's news fisherman have feared for years.

Scientists say the Asian Carp has the potential to wreak havoc on the $7 billion fishing industry.

The professor found traces of the Asian Carp in Lake Erie as well as the Chicago area.

It's concerning because Asian Carp grow up to 100 pounds, leap out of the water and destroy habitats for other fish.

"Everybody up and down the lake, they're saying how bad it could be if it happened,” said Peden.

A team of researchers spent the last two years collecting more than 2,800 water samples along the great lakes basin.

"You can think of them as like little tiny blue whales of fresh water,” said Jerde.

He says they discovered close to 60 positive hits for the carp in the Chigago area.

One in Lake Calumet and six in Lake Erie.

This discovery may influence the debate over sealing off Lake Michigan.

"The only thing they could probably do that would longer the effects of it is close off the river there in Chicago,” said Peden.

Jerde says infected tributaries and rivers may be more damaging than an entire lake.

In December a court dismissed a case filed by five states seeking to seal off Lake Michigan.

The Army Corps of Engineers says it has an electric barrier outside of Chicago and it is keeping  the fish out of Lake Michigan for now.