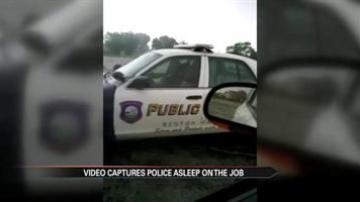 BENTON HARBOR, Mich. -- A Benton Harbor woman recorded video of two police officers allegedly sleeping on the job in their patrol car. The woman posted the video to Facebook and Benton Harbor Commissioner Trenton Bowen shared it with his Facebook friends. The video has created heated discussions online.

The woman who recorded the video wants to remain anonymous. She says the Benton Harbor Police Officers were napping in public while on duty.

"Police are paid and trained to serve and protect," she said.

"Well anytime you are asking residents to pay more money for police cars, in such tight times, it's best to have your best foot forward. I think it makes it difficult and quite awkward when you have unfortunate situations where you have police sleeping in police cars," said Muhammad.

Johnson raised her children and grandchildren in Benton Harbor, but she says violence has been increasing and that worries her.

"We've got a lot of young kids growing up and I don't want to be like in Chicago where kids are getting shot all the time," said Johnson.

Johnson says even if the officers didn't have a call to respond to at the time, their presence is always needed.

The question a lot of people have is whether or not any disciplinary actions were taken against those two officers.

We tried to contact the director of the public safety department and the city manager to get the answer to that question and are still waiting to hear back.