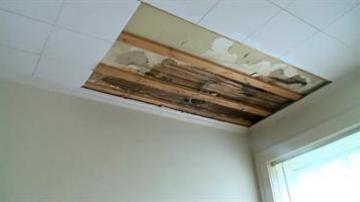 SOUTH BEND, Ind. -- A resident of a South Bend apartment complex says every time it rains, it rains in her apartment. She said the management told her the problem would be fixed before she moved in, but it still hasn't been fixed.

Dana Pokorny has lived in her top floor apartment at Washington Colfax Apartments for only 54 days. She contacted ABC57 because during the storms on Monday because it was raining in her living room.

"This all came crashing down the first 2 weeks I was in here. They said it was fixed the end of May and this morning I wake up to it just pouring in here again," said Pokorny.

"I'm almost wondering when the other rain comes in tonight because that's bowing right there now-- and its bowing out there also. So am I going to lose my entire ceiling tonight or what's going to happen?" said Pokorny.

She hasn't even put up decorations or moved in her furniture because she worries it will get ruined when it rains.

She cleaned up most of the water that came in Monday, but there are water streaks on the walls and buckling in the stained ceiling panels.

"I love my apartment. I like my location. I was promised it would be ready. I can't afford to move-- it rains in my apartment," said Pokorny.

Part of her ceiling is missing.

She says the property manager promised the roof would be fixed, but that hasn't been completed yet.

"They're renting out these apartments but this is what you get. They promise you it's going to be completely ready to move in. and then when you move in nothing's been done," said Pokorny.

The apartment complex said they are working to fix the problem now that it has been brought to their attention.

Code enforcement went to the apartments on Monday and issued a citation for all the water that is leaking in Pokorny's apartment. The complex has 24-hours to initiate fixing it from the time they receive the letter.

We have had the pleasure of providing housing for hundreds of residents of the South Bend area for the past 8-plus years -- we will continue to do whatever it takes to respond to all tenants needs in a timely and appropriate manner.