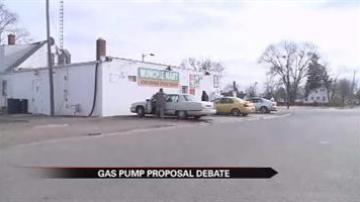 SOUTH BEND, Ind. -- The owners of a local store have asked the city for approval to tear down an adjacent home and add gas pumps to their business. Neighbors are against the idea and are asking the common council to reject the plan.

"We also want to give our customers the option to buy gas,” said Miller.

The owner's request to add two gas pumps and a parking lot -- in place of where a house now stands-- has been met by some neighborhood opposition.

"We just didn't feel that we needed another filling station, gas pumps, a half a block from a full service gas station,” said Gail Brodie, President of LaSalle Park Neighborhood Association.

"If the Munchie Mart is able to obtain their expansion then I will have now stereo, one at my front door and one at my back door,” said Wendell Johnson, VP of LaSalle Park Neighborhood Association.

Brodie and Johnson are life-long residents of the area and believe expanding the Munchie Mart will expand crime along Western Avenue.

"We've had shootings on this corner, prostitutes walking up and down the street, we have drug deals,” said Brodie.

"Can you imagine that at your back door like it is at mine?” said Johnson.

Police have been called to the Philips 66 gas station at 3417 Western, 33 times over the past year.

They've been called to the Munchie Mart 22 times.

"We don't need any more problems that close,” said Brodie.

Miller says the neighborhood association’s argument has no merit, especially since their store hours will remain the same, 9 a.m. to 11:00 p.m. whether they can sell gas or not.

The owners’ proposal says they will spend about $500,000 beautifying the area if the common council approves the request to add gas pumps.