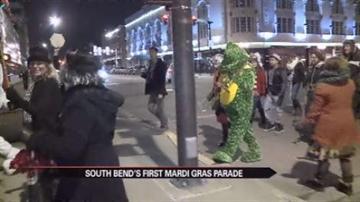 Dozens of people showed up in costume to walk the streets in downtown South Bend.

This was the first try at organizing a Mardi Gras parade.

Many people found out about the parade through Facebook and hope it is just the first of many to come.

The parade also helped a lot local businesses. Many downtown restaurants had Mardi Gras specials after the parade.