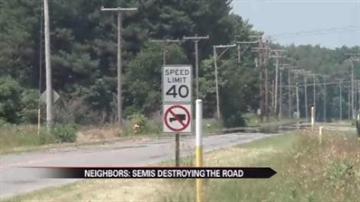 ST. JOSEPH COUNTY, Ind. -- Some New Carlisle residents say huge trucks are destroying their road. They say the trucks are using Snowberry Road as a short cut to a nearby sheet metal plant.

Ed Van Lue has lived on Snowberry Road for 50-years.

As a former employee of the St. Joseph County Highway Department, he knows a damaged road when he sees one.

"These 80,000 pound plus trucks coming through here are just cracking this road up about every ten or twelve feet,” said Van Lue.

"I've talked to a number of people, even the county road commissioner about getting load limit signs put up here and it does absolutely no good,” said Van Lue.

He's even tried calling the police.

There is an alternate route for truckers-if they choose to take it.

"The trucks are supposed to use Larrison which is a half a mile west of here. Most of them do, but some of them think this is their private short cut,” said Van Lue.

Not only is the extra traffic a nuisance, Van Lue says it's also become a hazard.

"They're supposed to have their loads tarped. None of them are tarped. Pieces of metal flying everywhere,” said Van Lue. "Something needs to be done. Somebody needs to stop passing the buck and get something done."

An official from 360-Degree Metal Recycling, the plant residents complained about most, said their trucks use one route and one route only. They said that one route doesn’t include Snowberry Road.

We also contacted County Commissioners, but have not heard back yet.