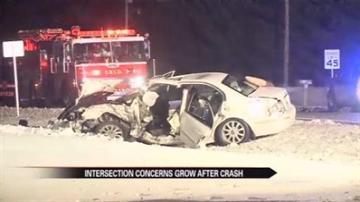 ST. JOSEPH COUNTY, Ind. -- Residents and business owners near the intersection of Ireland and Linden roads say they have been asking for a traffic light or stop sign for years. They say the reduced speed limit hasn’t done any good.

Neighbors say Thursday night's crash between an Indiana State Police trooper and another car is just more proof something needs to be done.

Cars speed through the intersection of Linden and Ireland Road at speeds well over the speed limit and crash.

Dant says most involve someone headed south on Linden- hit by a driver coming up over the hill on Ireland.

Her preschool sits on the northwest corner of the intersection, close enough to have cars land in the front yard.

The neighbor across the street has replaced her fence two times.

Scattered rubble through the melting snow is all that remains of Thursday night's crash.

He was T-boned by the trooper.

Police had to free him from the totaled Hyundai Elantra.

"We've petitioned for a stop light, we've had parents help us with that and we're not able to get one there,” said Dant.

The speed limit has been reduced, but Dant says those petitions for a light or stop sign remain unanswered by the street department.

"It's better than it was and you're still seeing these things so I really think another stop light would help,” said Dant.

We contacted the streets department, but have not received a response.

The driver of the Hyundai is still in critical condition at Memorial Hospital. His family had no comment.

His passenger is in fair condition.

The state trooper was treated and released Friday morning.