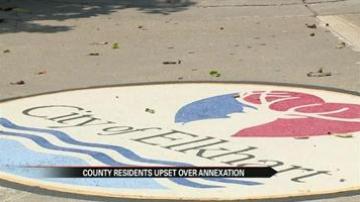 ELKHART COUNTY, Ind. -- Some residents in Elkhart County whose properties were annexed into the city at a meeting Monday night are not happy with the annexation. They worry their cost of living will go up and their quality of life will go down.

Terry Karre, who lives on US20, is on a fixed income and says he had no say in whether or not his property was annexed.

"We've got all but one resident out of 13 that is willing to go to court and we will take this to court to fight it because we were forced into something that we had no control of," said Karre.

Karre explained why the annexation will ruin some of his favorite activities.

"Right now I can shoot my gun. I can have a fire, I can burn my leaves, I have 39 fruit trees that we prune all the time. We have to burn that brush," said Karre.

Karre says he won't be able to use his big burner once his property is inside the city limits.

Michele Korach lives in the city and wants the county people to stay out for financial reasons.

"It's not that I don't want them- I think they're amazing people. It's that with the resources being what they are and the potential for increase," said Korach.

She fears taxes will be increased to provide services to the new city residents.

That's why the city wants to annex areas - to increase revenue.

One group of homeowners avoided annexation because of a huge turnout from neighbors.

"Happy that the council finally came to the realization that they were wrong," said Wall Rose, a homeowner in area 10.

His neighborhood is safe, but only for a year - when annexation can be considered again.

"All of our taxes are going to go up in spite of what those people at city hall say," said Rose.