Residents have close call with big tree in Mishawaka 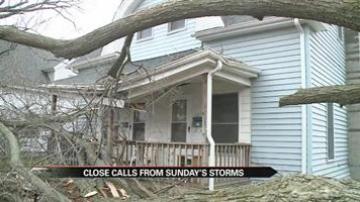 MISHAWAKA, Ind. -- Cleanup is still underway in Mishawaka where crews work to clear trees and restore power to residents. Two residents are staying elsewhere when a tree fell on part of their home on Grove Street.

"All of a sudden I heard this big crash and then I saw it coming down and I ran toward the center of the room. It was scary. I looked outside and it's just like on our house," said Karli Pepin.

Pepin said the high winds shook the entire house, then the tree came crashing down on top of their house.

"Right when it hit, everything fell off the inside wall. Things were breaking and the whole house was shaking, it was crazy," said Pepin.

The uprooted stump brought concrete up with it.

"It wasn't dead or anything so for the wind to take it out is crazy. And it has some of the sidewalk stuck in it," said Pepin.

Pepin's husband David wasn't home when the storm blew through, but he was pretty shaken up.

The Pepins stayed in a hotel Sunday night because they feared the winds might blow the tree branches through their window.

Monday they called some friends to help them clean up the debris.