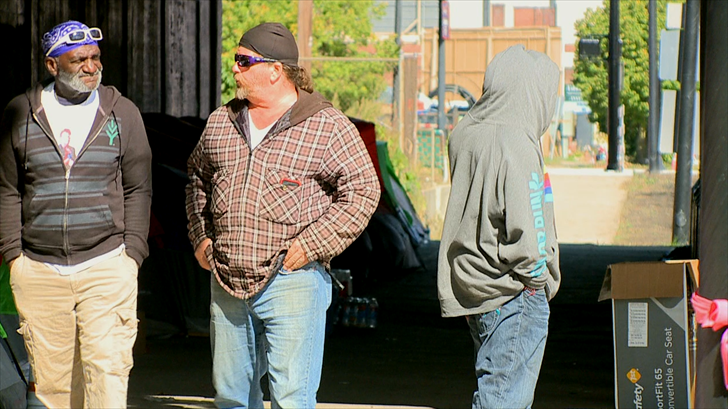 “Where we gonna go?... That’s the problem,” said Steve White, a homeless man in South Bend.

Steve has been homeless for four weeks now, and while he loves this place whole-heartedly,

“I fought for this country, it’s a beautiful country. I wouldn’t wanna live nowhere else.”

He is sad to see what is still happening around him.

“Just… I don’t know man it’s hard to explain. For the down and out, we’re not taking care of each other,” said White.

Different agencies like Project WARM, Center for the Homeless, and Hope Ministries have been working with the city to find a solution for the group of homeless staying under the bridge near the old Transpo Station on Main Street in South Bend. But both the homeless and area residents are left wondering when a solution will take effect or even be announced.

A meeting was held Wednesday, October 12th to discuss the next step and a possible solution, but an exact solution was not reached. However, after speaking with a representative on the committee, he says a solution will happen and that it’s going to be ok.

In the meantime, White is doing what he can to find a solution of his own by looking for a job.

“I’m a welder a certified welder. I do electricity, I do plumbing. But I can’t put it to work because I don’t have that chance to get in. They always give me the same thing. ‘Well where you stay at?’ ‘I stay at Tent City’. ‘What’s Tent City? Oh wait I already know we saw it on the news, we’ll get back with you’,” said White.

Even on his hardest days, though, White says he doesn’t take for granted what others have done for the group there.

“They’re looking out for some of the people down here the best that they can,” said White.

One person on the committee says the search has become more than just a discussion at the table.

Representatives say they have been on a continuous search for a place to house the homeless for weather amnesty, adding that they’ve looked at more than 20 different buildings in just one day to help find a solution soon.

Until that solution is reached, White says he isn’t giving up hope just yet.