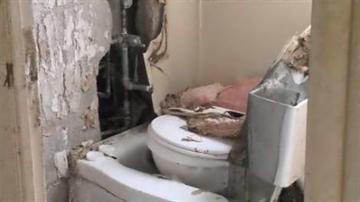 MISHAWAKA, Ind. -- Apartment renters who say they suffered through black mold, cockroaches and bed bug infestation may now be facing something even worse. Residents of the Princess Apartments on East 12th Street in Mishawaka are homeless after the city shut the complex down.

Over 20 people, including the elderly, disabled and families with children are scrambling to find a place to live.

Some of the residents are in local hotels with the help of the Red Cross.

Ten-year-old Desiree Peppers says she moved into the Princess Apartments a few months ago and didn't like it from the start.

When Desiree got home from school Thursday, her mom told her it was time to pack again.

Her uncle Mikey, Michael Carlo, says these problems are unacceptable and the landlord Randy Miller is to blame.

"We've been asking this guy for months, months to fix things around here. Refuses. Won't come up here, won't talk to nobody,” said Carlo.

Water ran over the electrical box like a waterfall Thursday.

"It was flowing down this wall over top of the electrical panel,” said Bo Hundt, building commissioner.

When the city of Mishawaka showed up to turn the water off, they found more problems.

"Some of the unoccupied rooms, some of the floors were actually about to fall through as well,” said Hundt.

After residents fill the last of the moving trucks, they're heading to the courthouse.

"I'm filing a small claim at this point. I don't need a lawyer for that,” said Carlo.

Until the changes are made, residents are homeless.

Miller has 30 days to come up with the money, but he already owes $12,892 in back taxes on this apartment complex.

Miller did not answer our phone calls and his voice mail box is full.