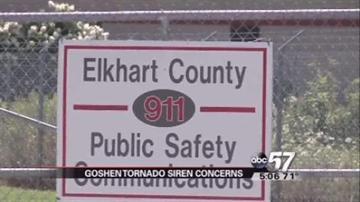 GOSHEN, Ind. -- Tornado sirens have sounded twice in the last week in Goshen, but there were no tornadoes. Residents want to know the city's policy and procedures for activating the sirens.

"One of my sisters started crying and went downstairs because she thought there was going to be a real tornado," said Elijah Miller.

Elijah says it was scary when the sirens started going off as he was getting ready to go to bed.

"We heard sirens and most of the kids ran to the basement because they were pretty scared," said Suetta Miller.

"We thought there was a tornado," said Elijah.

A week ago Wednesday, a 9-1-1 caller thought a scud cloud was a tornado and dispatchers sounded the tornado sirens.

"We get a call from a caller and so you take the caller at their word," said Dijkstra.

A lot of people in Goshen think the siren policy needs to change. Other cities, like South Bend and Elkhart, make sure they have more than one caller reporting the tornado sighting before they activate the sirens.

"I would definitely rather have someone who is trained in spotting a tornado actually make the call," said Suetta.

False alarms could leave residents wondering if the siren means a tornado is coming - or not.

"Actually we went upstairs and watched a movie. It's totally not what you should do," said Goshen resident Andrea Keck.

2) A trained spotter sees a funnel cloud. At that time, there is always enough law enforcement and public safety personnel out and about, on-duty at any one given time that the spotter information can be pretty easily verified.

So if anyone calls 911 and says they see a tornado, we broadcast the location and info to our units and ask for verification. If it is verified to a reasonable degree we will activate the sirens. In other words, is not just one person's set of eyes that will cause them to be activated and no one random citizen on 911 can cause the activation.

I'd recommend contacting the City and County Commissioners as well as the county EMA. Keep in mind also that every county / community / jurisdiction has their own protocol.

As for the NWS outreach efforts - we work with counties to maintain StormReady status (if they are recognized as StormReady.)   Siren protocols are a subset of the entire application process. Renewal is conducted on a three year cycle and the counties review and update their policies and protocols to reflect changes.

The Elkhart City Communications Center is responsible for the actual activation. Our policy states:

“The tornado siren is activated only once a tornado warning has been issued for Elkhart County or when we have been informed by other authorized sources that a tornado or funnel cloud has been sighted in Elkhart.”

An authorized source would be described as a representative of public safety or trained weather spotter.

If we receive a report of a funnel cloud from a citizen, we alert all public safety personnel and dispatch an officer to the area in an attempt to confirm the report. It is not our policy to activate them as we receive sporadic reports from untrained sources in varying areas without confirmation.

That being said, we also urge dispatchers to use common sense in being that if numerous similar calls were received by citizens within a similar geographic area advising a tornado was spotted, we would apply the above procedure; however would take into account the probability of this being an actual weather emergency and would then activate the siren.

Our goal is always to ensure the safety of our citizens.  However, in doing so, maintaining the integrity of the system by preventing overuse.