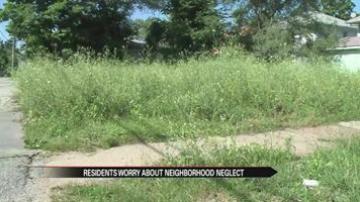 SOUTH BEND, Ind.-- South Bend residents are upset that crews aren't maintaining some of the vacant lots that they say are city property.

The city of South Bend is almost 500 days into its initiative to address 1000 vacant homes in 1000 days.

Jessica Hoover said, “It’s absolutely heartbreaking. It’s like lets do this, but once it’s done, they aren’t maintaining it. So it’s just another eyesore in the community.”

Hoover said she has taken cleanup into her own hands so that California Street will be safer for her family.

Hoover said, “I have four children so we keep it maintained so the kids can play over there so it stays nice.”

Across the way on North Adams Street, Joanna Day said a vacant lot by her home looks like a landfill.

Day said, “It’s out of control. It’s like a little jungle out here on Adams.”

Day hopes the vacant lots won't diminish the value of her home.

Day said she has been trying to clean up the abandoned properties on her own.

“I’ve found a syringe before, little baggies all the time, I find a lot of shoes. Or like just one, no matching,” Day said.

Day said she was upset that she received a notice in the mail saying she needed to mow her lawn or pay the City of South Bend up to $190 to do it for her.

"Maybe they could stop sending out papers and worry about their own properties," said Day.

On Monday the Mayor's Office responded and said they will look into the cleaning up the vacant lots if they are city property.