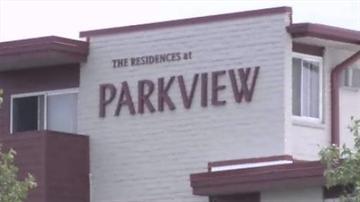 MISHAWAKA, Ind. -- A resident of the Parkview Terrace Apartments off 13th Street in Mishawaka says the conditions inside her apartment are so bad she's worried about her kids' health.

The Parkview Terrace tenant is afraid to go public. She fears that she will be evicted if management sees her complaining.

But she says her message is very important.

"There is mold and there is water leaking and there's electrical issues," she said. "My kids are breathing in the mold. I get headaches from it."

She says she has talked with the management of the apartment complex and she's even gone as far to call the Housing Authority and Code Enforcement.

"Their bed was ruined and their clothes smelled like mold. There was mold growing on my daughter's boots," she said.

She said the response was always the same, just a band aid fix.

There are pictures from another tenant's apartment on the third floor. She is concerned about the water that is sitting stagnant on the roof.

What appeared to be mold was visible when our cameras were rolling so we stopped by the management office to get some answers.

They say there is no mold.

"That's not true. We've had several inspectors and we've had the city out here and they cannot find any mold," said an unidentified person with Parkview Terrace management.

We reached out to the company that manages the apartments and received the following email:

I am sorry to have missed your call. I was in a meeting until just now. I was surprised by the allegations since the owners just completed a substantial renovation of the property over the past year (approximately $4.16 million dollars). Significant improvements were made to each unit and a new community building was constructed. The owners, also, worked with Habitat for Humanity to build 4 single family homes on part of the land for about $513,000. It was a very nice partnership.

I understand that there was a picture presented to you of the roof. According to the Manager, this picture does not reflect mold, but may illustrate dirt. All the roofs were replaced during the rehabilitation and we have received no other resident complaints regarding leaks from the roofs.

All work order requests are handled promptly, especially those dealing with water because of the potential impact on the unit and residents. There would certainly be no termination of lease or other action taken against someone who has a complaint. This property is subsidized through the Section 8 program and we make every effort to ensure that the living environment for our residents is a quality one. That is why we were so pleased to be able to make the capital improvements that were completed with the renovation.

The resident could call me and I would be glad to have a qualified environmental professional check her apartment, as well – and we would supply her with a report.