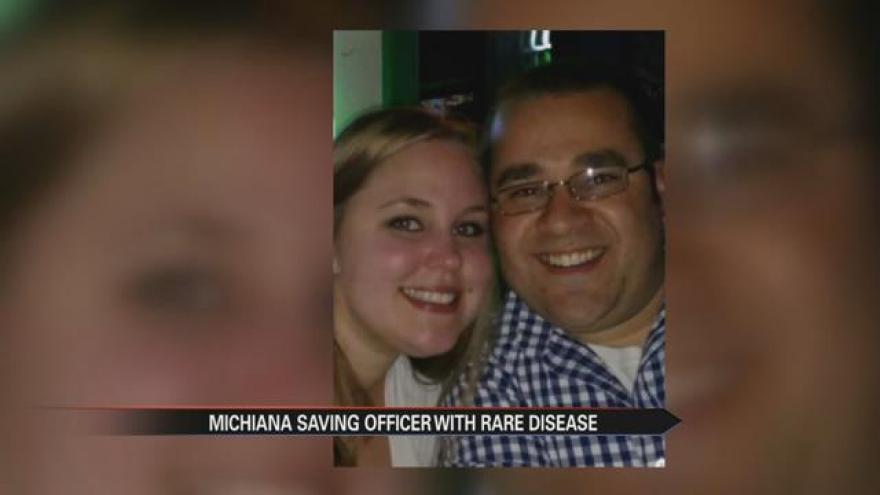 Michiana residents are raising money to help save the life of a man who protects them. The effort to save a St. Joseph County Police Officer who has a rare cancer has exceeded expectations.

Corporal Kyle Stopczynski is described by his police partner as the guy everyone wants to be around.

"He's always trying to talk to people, going above and beyond our normal day. He'll stop and talk to somebody who's not having a good day to try to cheer them up," Corporal Matthew Parmalee said.

Last week, Stopczynski went to Texas to receive treatment for a rare cancer of the spinal cord, myxopapillary ependymoma.

"When he found out and told me, it was kind of disbelief. He's so young. And for something like that to happen to him I thought it was unreal," Corporal Aaron Santa said.

After the disbelief wore off, Corporal Santa and Corporal Parmalee got to work to help Stopczynski.

Santa started a Go Fund Me page for his friend's medical bills.

"That just took off. The community just supported him tremendously," Santa said.

So much so he's had to increase the fundraising goal after nearly $25,000 was raised.

"People from all over the community, outside of the community. Coworkers, friends, strangers," Corporal Santa said.

Now, the effort has grown from just a web page, to an event, an open bank account for donations, and coming soon, bracelets made by Parmalee.

"We started these bracelets and they say we support Stopper #280 which is his badge number," Parmalee said.

A badge number that has inspired hundreds to save an officer known for stepping up to save others.