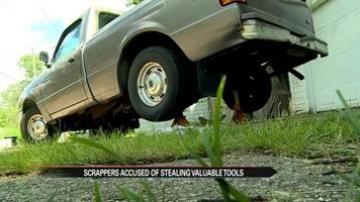 SOUTH BEND, Ind. -- Residents on South 30th Street in South Bend are upset after discovering someone stole parts from a truck they were fixing for a neighbor. They think a scrapper stole the parts.

In South Bend's River Park neighborhood, residents often put things out at the curb that are free for the taking.

But in April Bell's case, someone stole truck parts that were hidden in her back yard near the alley.

Bell says the drive shaft and cross member were hidden.

"They were down underneath on the other side so they were shoved underneath so that you couldn't really see them driving past," said Bell.

But someone did see them and took them from their property on South 30th Street.

The two car parts are worth hundreds of dollars at the scrap yard.

"It's very frustrating. We take the time out and now it's our fault. Even though it's not really our fault, we have to come up with the parts to fix it," said Bell.

Some comments were from people who said they have had scrappers come into their yards too.

"We've been out here like cleaning out our garage and I've never, I've had scrappers come by and ask me if I have any scrap. It's not unusual for them to be driving up and down the alleys," said Bell.

It's for that reason one neighbor offered to help her pick out security cameras.

"The benefits of having it there are just in case. A lot of times you get a discount on your homeowners or renters insurance for having a video security system up," said Chug Jackels of NU2UPC computer store.

Jackels says if Bell had a security camera in her back alley, she would have at least known the color, make and model of the thieves car.

"It gives you the ability to pick out more details, more features with the possibility of picking out the license plate - color, make and model of the vehicle  that they're driving and provides the police a lot more information to go on," said Jackels.