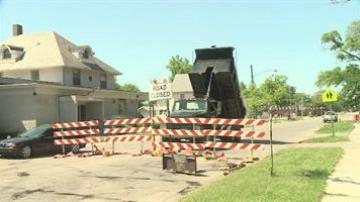 ELKHART, Ind. -- Residents of Prairie Street in Elkhart say a lot of dust is traveling down their street from the construction of a railroad overpass. City officials say the project isn't causing any environmental problems, but residents disagree.

The overpass is being built because the train has caused major traffic backups over the years.

Sometimes as many as 50 trains pass through each day.

Deandre Peoples says he supports road projects, but doesn't like what this one is doing to his property.

"It's affecting me, messing up my car, paint, loose gravel, traffic going in and out of the alley," said Peoples.

The project is expected to be complete in November 2015.