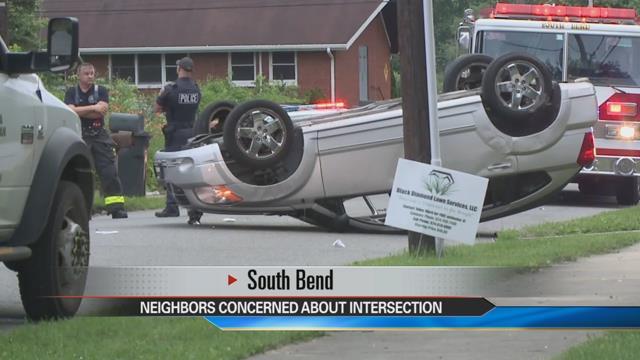 South Bend residents who live near the intersection of North Olive and Hamilton streets are upset about dangerous drivers in their neighborhood.

On Sunday a car overturned and hit a utility pole in that area just feet away from where children were playing basketball around 9 p.m.

Margie Davis said, “A lot of people just fly through this intersection constantly.”

Davis said, “I heard this horrific crash, I came running outside and I saw a car spinning around in the middle of the street and a big chunk taken out of the utility pole.”

Police believe the cause of this crash was cell phone use. The crash happened right in front of Lisa Ellis' yard.

Ellis said, “They fly down this street all the time. That's why I  was asking some of the guys where do we call to get the signs that say slow down children in the neighborhood because these kids are out here all the time playing.”

Ellis said her daughter was outside minutes before the accident.

She says she's shocked the driver was not seriously injured.

Ellis said, “She looked like she was fine but thank God for that because they said she went airborne on one tire!”

Davis and Ellis both agreed something needs to be done about this intersection and dangerous driving.

They said their cars parked on the road get side-swiped regularly.

Davis said, “I had it parked in the street and some guy came flying around the corner and smashed right into the back of it! If I had been out there to put my suitcase in there like I'd been planning, I probably wouldn't be talking to you right now.”

On Monday police said the driver of the car in the video had not received a ticket.