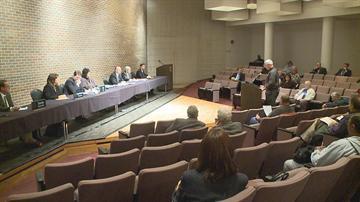 SOUTH BEND, Ind. – The recital room at the Century Center rang with protests from people opposing a proposed increase in electric bills at a public hearing Tuesday night.

In September 2011, Indiana Michigan Power filed its plan to raise rates for residential customers by 22.7-percent, about $20 per month for the average customer.  As part of the process the Indiana Regulatory has held public hearings on the issue around the state, on Tuesday evening the people of South Bend got their chance to testify on the proposed increase.

"I don't know how people on a fixed income or social security alone are going to be able to absorb this,” Steve Jones explained to commissioners.  “Because they're already living below the poverty level."

One of those people living on a fixed income was Billie Bratton, who also took to the podium to tell the commissioners how a larger electric bill would affect her.

"I know there's got to be a lot of women in my situation that can't get by, they can't get by with an increase," Bratton testified.  “It’s not just me; it’s everybody that it really hurts.”

Bratton estimated that she will pay around $550 more in electric bills.  She said she lives off of social security and savings left by her deceased husband.

"But I've had to get into it to help pay for these electric bills,” Bratton described.  “I could live 20 more years and I won't even have any money."

Indiana Michigan Power Spokesperson Sara Bodner said the company sympathizes with people like Bratton, but simply has no choice but to raise rates.

"We are at a place where we have been cutting budgets, we've been cutting expenses, we have done everything that we possibly can,” Bodner explained.  “The bottom line is we need to increase rates in order to provide reliable and safe service."

The Indiana Regulatory Commission will consider the testimony from public meetings held around the state in its decision on whether to approve or deny the rate increase.  The decision is expected sometime in the Fall.