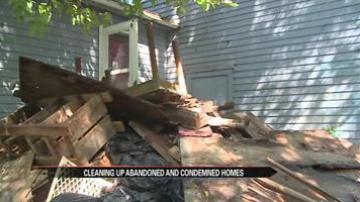 SOUTH BEND, Ind. -- Residents on Eckman Street in South Bend are hoping a city councilman will help get a condemned property in their neighborhood cleaned up.

The health department condemned the home at 222 East Eckman in May.

"So if this was condemned in May, why is it August and they're still messing around," said Councilman Derek Dieter of the South Bend Common Council.

Neighbors say no one lives in the house, yet the trash on the porch and back yard continues to grow.

Neighbors want to know what's next for this property.

"You've got vermin, you have wood, you have 3, 4 foot piles of stuff in the back yard, you have a garage full of the same things," said Dieter.

Dieter made a few calls and found out once a house is condemned by the county, there may be a gap in communication when it comes to relaying that information to city code enforcement.

Dieter says that's got to change.

He says at this point, cleaning up the property needs to be a priority.

"I think this stuff needs to be cleaned up immediately and we can worry about all the legal aspects later," said Dieter.

Dieter says it's not enough for the city to write a ticket or give the owner a notice, it's time to step in and clean up.

"There are some things that code has to do procedurally but I think it this is an extreme case," said Dieter.

He says the city needs to look at the bigger picture. It will be difficult to sell houses nearby with the property being used as a landfill.