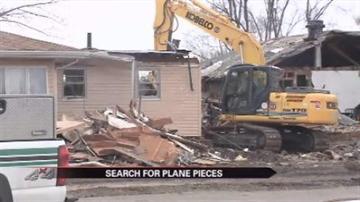 SOUTH BEND, Ind. -- Wednesday was the first full day residents of North Iowa Street were allowed back into their homes. Work at the scene of the crash continues as the NTSB searches for clues. Residents are watching the scene closely, still trying to comprehend the tragedy.

Representatives with the National Transportation Safety Board have been at the scene of the crash all afternoon digging through the rubble, looking for pieces of the airplane.

Those pieces might help answer questions about why the plane crashed Sunday afternoon.

“It's unbelievable. The one we can see the kitchen and we can see the pictures hanging on his walls and there's just big holes,” said Mary Jane Klaybor.

It was the first time Klaybor got to go home since the crash.

"We weren't here for two days because we were blocked off because they needed all the space to bring the equipment in front of our house. And so that was strange just looking down the street and seeing all of that,” said Klaybor.

Klaybor and her husband Stan watched crews dig through the debris of their neighbor's home.

"They're looking for parts of the plane and I see they have found 4 or 5 of them. So it's good they're still looking for things,” said Klaybor.

The Klaybors weren't the only ones who couldn't pull their eyes away. Neighbors stood on their porches and lined the street, still unable to fully comprehend the destruction.

"You think of all the years you've looked out there and nothing's ever happened, that it's always been nice,” said Klaybor.

Neighbors say they have been in contact with the homeowners and the two homes that were the most damaged will have to be torn down.

It is unclear whether the third house, the first house hit by the aircraft, will have to be torn down. That will be an insurance company's decision.

The three people injured in the crash remain in the hospital.

Jim Rodgers remains in serious condition. According to posts on Facebook, Rodgers is breathing on his own and doctors are starting to take him off the ventilator.

Chris Evans was able to get into a wheelchair and visit Rodgers in his room. He remains in fair condition.

Both Evans and Rodgers have several broken bones according to the posts.

The only person from the ground who was injured, Diana McKeown, is in fair condition.