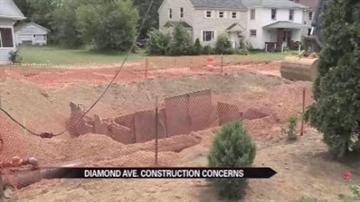 SOUTH BEND, Ind. -- One day after a worker got trapped in a hole, residents on Diamond Avenue say they haven’t felt safe in the construction zone for a while and that they knew it was a matter of time before something happened.

“The sand was pulling him under as they were holding him. It was pulling them down too,” said Charlotte Saunders, a Diamond Avenue resident.

“Being as though I see them all the time, it compelled me to go down there and stand there and actually pray,” said Jacqueline Hunt, a Diamond Avenue resident.

Neighbors say watching one of the construction workers plummet into a hole Wednesday was like seeing one of their worst fears come true.

“When you see people working with tools and equipment as big as this is, you always have in the back of your mind there could be an accident, you don't want it to happen but it can,” said Hunt.

Residents say since construction started, they've been worried about people in the neighborhood, especially their oldest and youngest neighbors.

Many are upset that the hole the worker fell in Wednesday is still wide open.

“This whole street is dangerous I don't understand why they would leave this hole open,” said Saunders.

Even though it's a little inconvenient and they are concerned about their safety, homeowners say they appreciate what the workers are doing to improve their community.

“It will be done one day and what happened yesterday should let us know that these guys are putting their lives on the line for us,” said Hunt.

One of the residents asked the workers when they would be returning to the site. He told her they would be back out Monday morning.