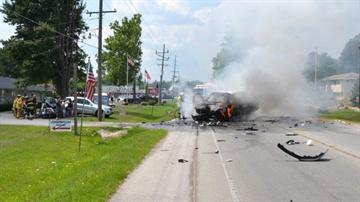 Wynnewood, Pennsylvania resident Jeremy Valentine was killed in the accident.

The investigation revealed the driver of a red Ford F-250 crossed the center line and crashed into Valentine's Mazda minivan.

"All of a sudden, the bus boy came into the kitchen, tells us in shock and panic there was a crash out there," said Ivan Tepo, cook at Maria's House of Pancakes in North Webster.

"It was the most horrific crash I've ever seen," said witness Diann Rush.

Server Cierra Hart was outside waiting for a ride when she witnessed the accident on State Road 13.

"I looked down at my phone and heard the crash so I looked back up and saw that they were still connected and then the red truck just flipped over all the way," said Hart.

Within seconds the pickup truck burst into flames.

"The first thing was try to put out the fire because we didn't want it to extend any further than what it was already," said Tepo.

Tepo says he and two other cooks didn't think twice about running toward the flames-fire extinguishers in hand.

"The flames were pretty big. We could feel it right in front of this door because after we couldn't stop it, the flames just kept going and we thought it was going to explode," said Tepo.

The four or five fire extinguishers they had weren't enough to battle a fire fueled by diesel.

"You could not even get close to them. The fire department had a heck of a time putting that diesel fuel out," said witness Wayne Rush.

"You could just feel the heat. It was hot," said Diann Rush.

Some say the actions of employees at Maria's were brave - even heroic.

The men are modest about what they did.

"I just consider our staff helping one another, that's what we do here, when we see something we've got to go out and help each other," said Tepo.

The Kosciusko County FACT team is still investigating the crash. They are waiting on drug and alcohol test results for both drivers.