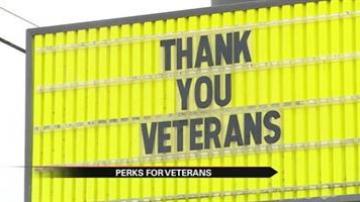 ST. JOSEPH COUNTY, Ind. -- Dozens of restaurants and stores offered specials and free meals for active and retired military on Veteran's Day as a way to say thank you for your service.

Some of the veterans said their goal was to eat for free all day long and be home in bed by 10.

Baldwin still remembers the day he was drafted.

Nearly 47 years later he's happy to accept the gratitude of those who wish to say thanks.

"Well I'm going to go over to the Sub(way) here in Niles, then I'm going to Arby's and then from Arby's I'm going over to a car wash in South Bend," said Baldwin.

And he's not the only vet who started the day with a free chicken lunch at Martin's.

"I did eat the food and this afternoon I'm going home to pick up my wife and we're going to Applebee's at 1:30," said Aldrich.

"I can go to Subway get a free Subway, I guess Applebee's does something. There's a whole list, I got a whole list in my car. I'm not going do all that," said veteran Jim Mahler.

Even with all these great deals, Vietnam Vet Fred Frost says it wasn't always this way.

"When I got discharged in 1969, people wouldn't even look at you in the airport. You'd just walk out and they kind of snubbed you," said Frost.

"We were spat on because we were veterans. When I flew into Chicago I was spat on, that's after I was mustered out," said Mahler.

The appreciation shown Monday means more to Mahler than just a free meal.