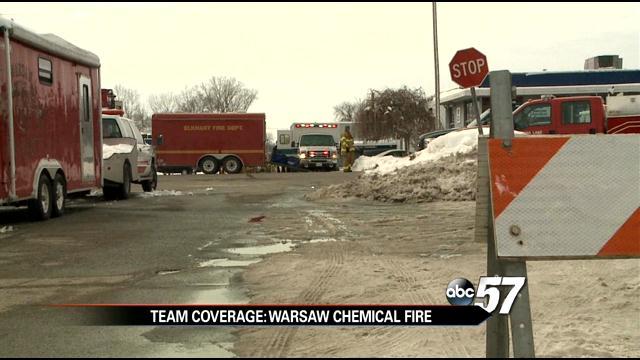 Investigators are still working to find out the cause of the fire at Warsaw Chemical Friday morning.

It happened around 11:00 at the facility on Argonne and Hendricks Streets in Warsaw.

Eight people were taken to an area hospital for minor burns and complaints of irritation.

Crews were still on the scene as of Friday night as they worked to clean the mixture of chemicals and water.

It is the threat in Winona Lake that has some conservation officers warning people about.

“The police department showed up, knocking on the door telling us that we had to evacuate,” said Melissa Wise.

Wise's home was one of the fifty houses evacuated following the fire.

The scene was hectic, roads blocked off, dozens of crews assisting, but it was the water and the chemicals that are a concern.

Thousands of gallons of water and chemicals leaked into Winona Lake.

“The fire was fought for some time so the chemical was mixed with the water from the fire department so it was probably several thousand gallons,” said Jerry Hoerdt, an Indiana State Conservation Officer. “The lake is ice covered, however, this chemical and the warm water discharge from the fire crews did melt a significant portion of the ice.”

After three hours of hosing down the chemical building water drained into storm water systems and is now threatening the wild life.

“We also ask that nobody consume any fish from the lake,” said Hoerdt.

Crews are working to aerate the lake to get rid of those chemicals so that no further damage is done.

“There could be an impact on the fish and it's remained to be seen at this time,” said Hoerdt.

The conservation officers say no one living on the lake is at risk, but he says they're asking for fishermen to stay off the lake until further notice.