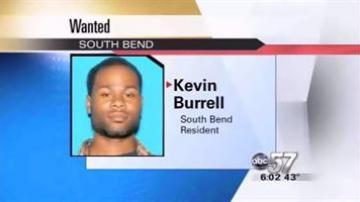 SOUTH BEND, Ind. -- An armed robber is on the loose!

Police say one of his partners in crime is being treated at Memorial Hospital and the other is behind bars.

Right now, police want to find a third man who may know something about a robbery attempt on a retired South Bend police officer.

The trio is accused of attempting to rob a former South Bend police Lieutenant on Thursday night, outside of his home on Woodbine Way.

Retired officer John Collins told police he had just returned from a trip to the ATM when three men pulled up in a black Durango and attempted to rob him!

Police said when one of the men pulled a sawed-off shotgun on John Collins, he pulled his own gun and fired three shots, hitting one man in the arm and foot.

Both brothers ran back to the SUV and ultimately ended up at Memorial Hospital.

Charges have been filed against both suspects: 22-year-old Prescott Brown, and his brother, 18-year-old Presley Brown of South Bend.

Prescott Brown is charged with Attempted Battery, Possession of Marijuana, and Assisting a Criminal.

Presley Brown is charged with Attempted Battery, Criminal Recklessness, and Pointing a Firearm.

Police said they found marijuana and a bloody bullet in the pockets of Prescott Brown. They also said that the round matches the ammunition fired by Collins' handgun.

When police reviewed Prescott Brown's criminal history, they found he had been convicted of Battery, a Class C Felony. He was released from probation on March 3, 2011.

Because of Brown's violent criminal history and the fact that this is a crime of violence, the State set the bond at $200,000 corporate surety or $20,000 cash.