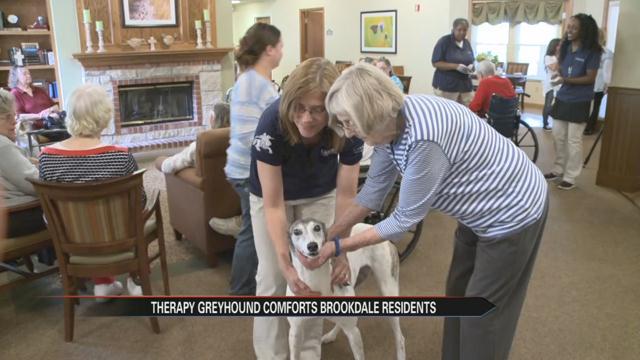 A retired greyhound's life usually begins with a racing career.

Only two to three years before either being killed, euthanized or rescued by one of many greyhound adoption agencies around the country.

And ohh are they fast. In fact one of the fastest animals in the world. But if you think they'd be a lot to handle, think again.

Retired racer Bessie, who turns 11 in July, spends most of her days like this.

"Everybody loves her as you can see," said Kay.

After spending her years on the track, Bessie was adopted by a family.

Unfortunately she was mistreated and she was returned last year to American Greyhound, an organization that finds homes for unwanted greyhounds in the great lakes area.

So Connie Mann and her family decided to take a chance.

"I'd seen on the American Greyhound web page that a dog had been returned after several years of being in a family. She was an older dog which makes them harder to adopt," said Connie.

But this is where Bessie's life would change, and not just her life, but Kay's life as well.

"I wouldn't give her up for anything," said Kay.

Kay Mann is 93. She moved in to Brookdale Senior Facility just last year.

Eight months ago she got a surprise in a form of a four legged friend.

A match made in heaven.

"That was my thinking in the first place. She's an older dog and what better place for her than a facility with elderly people. I know what dogs can do with therapy for anybody - but especially people with that have had dogs in their life and now they don't have one. But to have Bessie she’s the facility dog not just grandma's dog.  And they'll all tell you that I 'm pretty sure," said Connie.

If you don't take Connie’s word for it, Health and Wellness Director Shelly West will tell you the same thing.

"Bessie is awesome. It's a lot of therapy for a lot of reasons. She's comforting to not only the residents, but family members, staff.  Everybody that comes in loves her," said West.

From resident to resident Bessie makes her rounds, lifting spirits and spreading love.

And this old dog has a few tricks

She's resourceful. Doors are no obstacle.

"Just reaches up with her mouth - pull the lever down - and the door pops open - and she goes out. She learned how to do it in the courtyard too. She just hasn't learned how to close the door behind her yet - but we're working on that," said Connie.

Whether she's sleeping with Kay's cat or comforting Kay and her neighbors, Bessie is always looking for someone to snuggle with.

"Bessie she's different, with her color and everything. I hope she lives a while," said Kay.