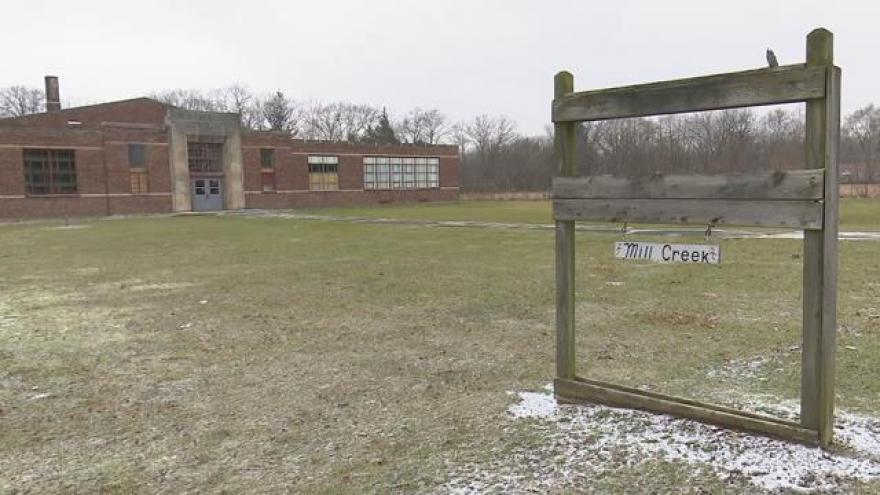 One man is giving an abandoned school in Mill Creek, Indiana a second chance to breathe life into the tiny town.

Peeling paint, flooded floors, and cluttered corridors are what are left of a decaying school in Mill Creek.

“It was a nightmare, let’s put it that way,” said 73-year-old retired veteran, Carl Carder.

Carder took us on a tour of the crumbling building.

“Back 30 years ago, it was actually the best school in LaPorte County, I mean the best school. It was unbelievable. This school was so beautiful inside of it. Then, they just let it go,” he said.

No one has used the school for 25 years.

“You can see how the lockers [are rusted]. Now, if we just pulled on them lockers, they would just fall out here on the floor, because there’s nothing here on the back. It’s all rusted off,” said Carder.

The retired veteran is determined to breathe life back into Lincoln High School.

“I bought it from a farmer. He was just going to leave it set. He was going to just let it fall down, I guess, and I decided it would be better to redo it, and you know make a library out of it for kids, because there’s nothing in this area at all,” said Carl.

That’s probably because Mill Creek is home to just over 1,000 people, none of whom have been inside Lincoln for nearly three decades.

“Just totally a wreck. I should have never started it, but now that I’ve started it, I can’t quit,” said Carder.

Plus, Carl says, he’s got nothing else to spend his social security check on.

“I could set at home, but what do you do when you set at home, you end up either dying, getting sick, or going to hospital,” he said.

So he’s been working on the school, seven days a week, for the past two years.

“I fixed the whole room up into here. This right here is going to be where the kids’ books are going to be at. I’m going to put shelving all through here,” he said.

He says he’s already got well over 20,000 books, with donations coming from as far away as Chicago.

“I’m going to try to fill up just about every room in this whole school with books,” said Carder.

“Don’t you think they’d read more. The more they read, the better off they’re going to be,” Carl said about the kids he hopes to attract to the library.

“This keeps me alive. It keeps me doing something,” he said.

This library will certainly be something the town has never seen before.

Carl hopes to open the doors of the new facility this spring, but since he is doing the work himself, he says it could take a few more years before it’s completely done.