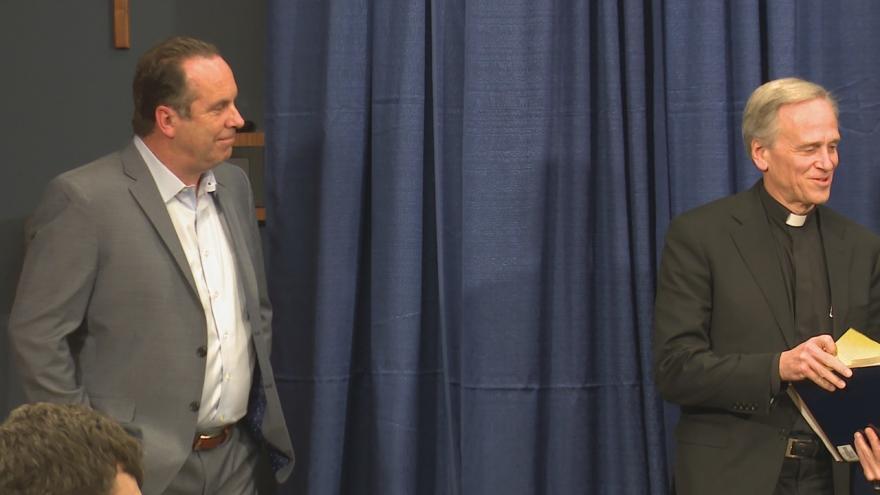 SOUTH BEND, Ind. - The past college basketball season was haunted by a simple question with a difficult solution - how can the game be cleaned up?

This past October, a committee was formed to do just that. University of Notre Dame President Rev. John Jenkins was included in that group, which released its recommendations Wednesday.

"I care a great deal about college athletics," Jenkins said when asked why he felt compelled to participate. "I think it's extremely important for our universities. Certainly it's important for the young people who play the sport. It gives them access to a place like Notre Dame. But for a campus it brings us together and it enlivens the spirit of the university. But if it's tarnished, if the news is bad, it's in danger."

The recommendations attempted to tackle a variety of issues in college basketball:

While the integrity of the game has been Jenkins insists that these proposals are meant to help the players.

"What we have to do is put in the regulation to prevent the bad actors from exploiting the situation and really to help these kids. I mean, really, they get benefits, but they can be exploited as well by people who have an interest in gaining from them. So let's put in regulations that help them enjoy the game and grow as people but not be exploited."

Brey praised the work that the university president did along with the committee, but then said that he thinks some of the recommendations should level the playing field for those approaching the game the right way.

"You don't want to sit here and be holier than thou," he said. "We've been very confident in how we've run it and I think a lot of college programs run it like ours and do it the right way. But there have been a few who have pushed it, and when you see some of them advancing in the NCAA tournament, that's a little hard to swallow."

One of the issues not mentioned in the report is the payment of players, which has been a growing request from within and without college basketball.

Still, Jenkins and Brey both felt that the issue wasn't feasible at the current moment.

"I think that's an easy crutch for everyone to throw out right now," said Brey. "If you think trying to get a hold of college basketball, you think it's tough now. We throw that one in there, it's going to be out of control."

"Once we go down that road, we become a second- or third-tier professional league," said Jenkins. "I don't see an end to that. And I don't want to see Notre Dame trying to outbid other schools for a player."

At the heart of the recommendations was the attempt to curb cheating among programs across the country.

Jenkins has voiced his own disappointment in the NCAA's power to regulate its own rules, and said the organization of an independent regulatory and investigative body would be a positive first step.

"What the FBI can do and what the NCAA can't do is wiretaps," said Jenkins. "[The NCAA] can't do subpoenas. But I think we can find some ways in which schools will have incentive to cooperate."

If the NCAA can enforce its rules, new harsher punishments are something Mike Brey approves.

"I'm hoping it's a deterrent for people to say 'Hey, I'm not even going to go down that road because it's too costly."

It is still unclear how or when these recommendations will actually be implemented to affect college basketball.