Reward for information of the whereabouts of Alma Del Real 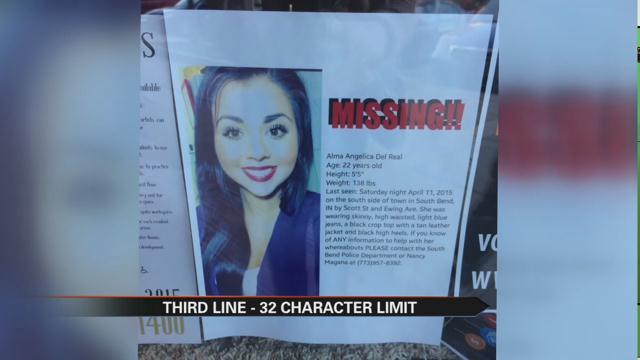 Michiana Crime Stoppers and South Bend Police have a plan in place to communicate with Spanish only callers.

Cindy Kilgore with Michiana Crime Stoppers tells ABC 57, as of right now, investigators are receiving about a call a day on the missing 22 year old Alma Del Real.

“People really spreading this word on a national level and in fact international down into Mexico so we are getting ready for that contingency that we may need to really step up our effort to be able to communicate with that population," said Kilgore.

As this case gains national attention, they have to be prepared to do things a little differently.

Before, if the local tip-line got a call from a Spanish-speaking person that call would be routed to Texas.

“But the potential problem with that could be that there are times when we need to have follow up contact with our tipsters beyond the initial receipt of the tip," said Kilgore.

Kilgore says now they will handle all calls concerning this case in house to diminish any possibility of lost information.

“So if we should get a tip from a non-English speaking person then we will be able to direct them to our call center," said Kilgore.

Members of the community have expressed interest in volunteering to take calls, but Kilgore says this is an open case, and those details need to be kept within the department.

“I have consulted with administration here at South Bend Police, and we do have Spanish speaking personnel available to us so if that becomes an issue we will cover that we will make sure that we will be able to communicate effectively with these folks," said Kilgore.