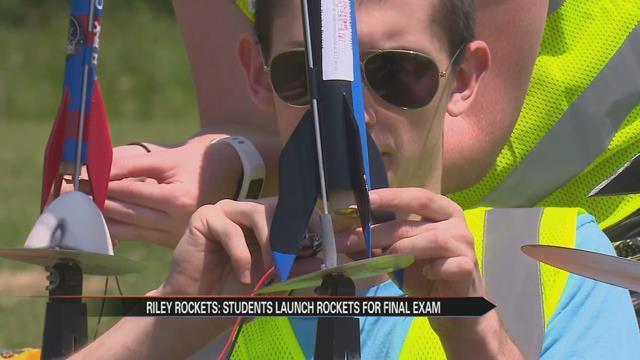 Riley High School students took part in what might be the coolest Physics exam you’ll ever see.

“It’s definitely a lot of fun,” Riley High School Junior Jacob Hasbrook said. “There was a lot of work that had to go into these.”

One after another, rockets made by the students launched into the sky over Notre Dame’s White’s Field Sunday afternoon.

The students spent the picturesque afternoon launching the rockets for their Physics final exam.

“The students have done all of the design, build and they’re actually running the launch, as well,” Riley High School Physics teacher Dr. Susan Sakimoto said.

More than 80 upperclassmen constructed the rockets in the final weeks of their semester.

Dr. Sakimoto, also known as ‘Doctor S,’ runs the project and helps her students design and build the rockets from scratch.

“And then they do thrust calculations and parachute calculations to make sure it will get off the pad and then come down safely,” Dr. Sakimoto said.

Students spent about 15 hours on the project, learning the ins and outs of rocketry, like the use of motors installed in their rockets.

Dr. Sakimoto said the rockets, if built correctly, can launch as high as 2,000 feet into the air.

When they worked, the students were thrilled.

“This has been an amazing experience,” Riley High School Senior Joshua Dick said. “I’m really glad I was able to be a part of this!”

Dr. Sakimoto described the project as hands-on learning. Some of her students get so invested, they even personalize their rockets.

“On the top, I put the badge numbers of the last four fallen [police] officers in South Bend,” Hasbrook, whose father serves on the force, said.

The project has been around for five years and continues to grow.

Dr. Sakimoto said it’s because her students see that if they work hard, the sky’s the limit.

“They built it and they launched it and it really went up,” Dr. Sakimoto said. “There’s a lot of joy there.”

Dr. Sakimoto has worked for NASA as a research scientist for 10 years, so she is literally a rocket scientist.

Her passion is rubbing off on her students – members of the school’s rocketry challenge team ran the entire launch Sunday, with their families looking on.