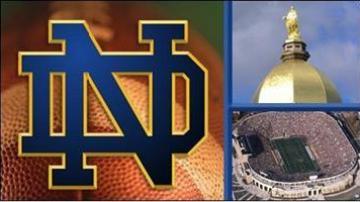 NOTRE DAME, Ind. – The Irish are rested after a bye week, and are gearing up to face rival USC on Saturday. This weekend’s game will be first night game played at Notre Dame Stadium in twenty-one years.

It won’t only be a great game on the field, but should be quite the atmosphere to play in.
“It’s what you expect when Notre Dame plays USC. They'll be a lot of noise, a lot of hype, and our players just need to focus on what they've done well over the past month or so and that’s playing good football,” said Kelly.
Last season the Irish broke the Trojans' eight-game winning streak in the rivalry beating them 20-16 in Los Angeles.
Kelly said that means now the two can get back to being real rivals.”[It] doesn't make for a great rivalry if you haven't won any games. So I think we can put that behind and really think it's a great rivalry,” said Kelly.
Kelly said the rest of the season doesn’t rely on just Saturday’s big match-up either, but winning them all.
"For us we want to get into a BCS game and we know what we have to do and we've got to win each and every game we play,” said Kelly.
The Irish take the field at Notre Dame Stadium this Saturday against the Trojans at 7:40 p.m.
Share this article: