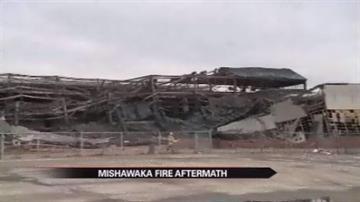 MISHAWAKA, Ind. -- The old RMG Foundry building in Mishawaka is now mostly twisted metal and charred wood. The building, off Union Street, had been there for more than 100 years before burning down Monday.

It was once a Dodge manufacturing plant but was being used to store boats and cars.

Firefighters are still on the scene, 24 hours after the fire began. They have been putting out hot spots all day.

Firefighters say 115 Starboard Choices boats were damaged in the fire.

"I'm kind of hoping that my car that was stored here is still here," said Ann Shutes.

Shutes came to check on her beauty on four wheels.

She was storing it here for the winter.

"It was my dad's car and I helped him restore it when I was a kid and he sold it to me,” said Shutes.

Shutes said she stored it in the north part of the building and she's keeping hope that there's more than memories left behind.

“It’s devastating. Wow. You just have to think of the years you spent in there this end is the steel shop here,” said Smith.

He spent nearly 20 years of his life in the steel shop.

"This was a noisy building here always angle iron being cut or steel being cut,” said Smith.

As investigators try to get to the bottom of what happened.

We spoke with the owners of the building by phone. They are trying to put together a contact number so people can find out what was damaged.