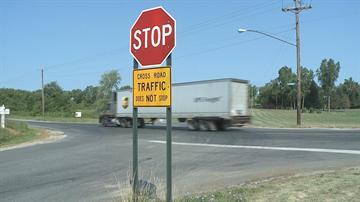 BARODA TOWNSHIP - Changes are in the works for a notoriously dangerous intersection in Berrien County. The intersection of Shawnee and Hill roads in Baroda Township have been the center of discussions this week.

The Road Commission met Wednesday morning and came up with a recommendation for a realignment. The meeting comes after the commission met with neighbors Monday.
“It's dangerous. We always approach it with caution,” said John Wescott. He lives in Stevensville but has taken his pets to Berrien Veterinary Services on the Southeast corner of the intersection.
When Wescott tries to pull onto Shawnee Road from Hills Road, he has a difficult time seeing oncoming traffic, especially Eastbound traffic travelling 55 mph on Shawnee.
“Yes speed coming down over the hill, that’s a factor,” he says, “But it’s the blindness of the intersection.”
The employees of Berrien Veterinary Services are seasoned veterans when it comes to dealing with the intersection. Krystal Kolvert and Shannon smith say the intersection is infamous. “The hill and a lot of people don’t pay attention to the stop right here,” they said. “It seems like almost once a month (we hear accidents). We’ve had quite a bit out here.”
According to Baroda-Lake Township Police five multi-car accidents have happened at the intersection since March of 2010. The most recent was just two weeks ago. August 14th a Dowagiac man was killed when he was driving down the hill on Shawnee Road and hit a car turning on from Hills Road.
“There were questions to be answered,” said Brian Berndt in his Berrien County Road Commission office a few hours after meeting to discuss a plan.
Berndt says the commission decided to take down distracting business signs and re-route Hills Road so it intersects perpendicularly at Shawnee Road. He says, “It’s easier for people to look both ways when you’re at a 90-percent angle.”

The plan still has to be taken to Township officials before a recommendation is approved. If that happens, construction would begin next summer at the earliest.