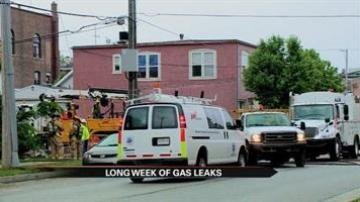 BUCHANAN, Mich. -- There have been three gas leaks in three days in Michiana. There were gas leaks in Goshen, Indiana and Buchanan, Michigan on Friday and a gas leak in LaPorte on Wednesday. The one in Buchanan on Friday was caused by road construction.

"We've been in a little bit of disarray for about six weeks," said Buchanan City Manager Bill Marx.

Orange barrels, detour signs and road crews are a sign it's summertime in Michiana - and time for road construction.

"The project is to reconstruct and repave Front Street, which is in our uptown area," said Marx.

Construction in Buchanan was halted for a few hours Friday morning after crews cut a gas line under east Front Street.

"We got a little too close, actually, we hit a gas line this morning," said Marx.

Several restaurants and stores were forced to evacuate-and drivers had to find another way through town.

"Any construction project tries people's patience and understanding and we do have those cases here," said Marx.

And on Wednesday, most of downtown LaPorte was evacuated for several hours because of a gas leak.

Marx says gas leaks are a common danger with summer construction projects-but in order to rebuild and renew roadways-it's a risk road crews have to take.

"In order to progress things and improve and repair things, sometimes those challenges have to occur," said Marx.

Marx says the gas line was repaired in about two hours.