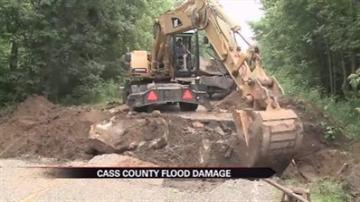 CASS COUNTY, Mich. -- A week of severe weather has done some serious damage to several roads in Cass County. Crews spent 11 hours on one road – and haven’t even finished repairing the hole caused by flooding.

Bland is traveling by public transit, but on Saturday she was behind the wheel of her own car on Mt Zion Road.

"I came in Saturday evening about 6:30 and it was okay. Then we had this big - I mean showers,” said Bland.

"We had a report here that we had water over the road with a big hole in the road,” said Mike Harris, Cass County Road Commission Director of Operations.

On Monday, Cass County roads crews were busy repairing what Mother Nature destroyed over the weekend on Mt. Zion Road.

"The road has been undermined from all the flooding that we have had over the past couple of weeks and we had to close this road immediately in order to keep the traffic from traveling over it,” said Harris.

"The blacktop had just dropped in where the water had washed out the foundation,” said Bland.

"When you are digging up things from the past you just don't know what you're going to come across,” said Harris.

Crews discovered part of Mt. Zion Road was paved over a concrete bridge.

The find makes the road repair even more time consuming.

"That's probably cost us a couple of hours digging that out as well,” said Harris.

"That was a cement bridge and it even had waters on the side of it,” said Bland.

"They are digging out some of the old headwall from one of the old waterways that were here from 80 - 90 years back,” said Harris.

Crews started repairing Mt. Zion road at 6 a.m. Monday and called it a day at 5 p.m.

They hope to have it reopened on Tuesday.

Then, crews will move on to repairing other roads washed out by rain water.