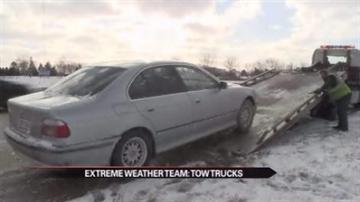 From rescuing cars that slide off the bypass, to towing cars that freeze up, Raymond Grummel with ASAP Towing & Recovery says when the roads are icy, he sees it all.

"It's not uncommon to actually practically live in these trucks during this season because the demand for our help is really high right now."

Most of the accidents he responds to are caused by people speeding in the snow on tires that do not have enough tread.

"I've seen so many cars out there involved in accidents with bald tires and it's like, they really could have avoided all those problems." Grummell explained.

He says the harsh winter weather is really hard on cars.  In fact, on average, he jump starts about six cars a day during the winter.  And he responds to several calls about cars that have stalled on the road because of the extreme temperatures.

Paul Gard learned the hard way when his car locked up on the bypass.

"I was planning on taking my wife out on a date and my car just stopped," he said.

He has just one word of advice, "Maintenance; take your car to get looked at, as bad as the weather has been lately everything needs to be checked."

Grummel says that preventative maintenance is best for your car in the winter: a fresh battery and tires with good traction are safest.