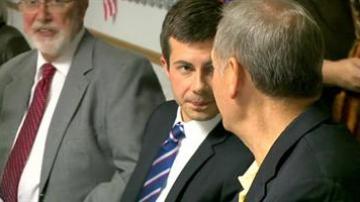 SOUTH BEND, Ind.-- Members of the South Bend Press Club hosted a roast for Mayor Pete Buttigieg before his deployment this February.

“You know I can't possibly imagine what they could possibly have for way of material, but I guess we're going to find out,” said Mayor Buttigieg before the roast.

Hundreds of people paid for tickets to enjoy a Polish wedding dinner and hear jokes at the mayor’s expense. Even the former mayor showed up to show his support.

“Obviously these nights are for fun,” said Steve Luecke, former South Bend mayor. “We poke fun at some things. All of us have our own little foibles that are easy to pick on."

According to the entertainment, Mayor Pete's quirks are his age, his lack of beard, and his obsession with roundabouts. Even his love of demolishing buildings inspired many skits.

“They're just going to razz him about Afghanistan, and God knows what else, probably the streets,” said Cyd Maravolo, member of South Bend Press Club. “I told him to have a couple of stiff drinks first, but he said he better pace himself."

His looming deployment to serve our country in Afghanistan didn't stop the jokes, but rather inspired more

"I don't believe in special treatment,” said Buttigieg. “So if they got some good stuff saved up then I better take it standing up."

The only special treatment he got: a visit from Andrew Berlin.

“Really a roast is another form of honoring somebody and we're honoring Pete," said Berlin.