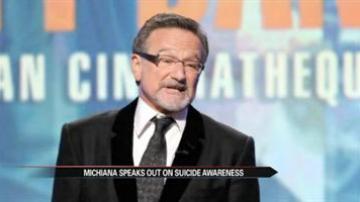 ST. JOSEPH COUNTY, Ind. -- The death of Academy Award winning actor and comedian Robin Williams shocked the nation. Williams committed suicide by hanging himself with a belt. Suicide is an issue rarely talked about but is on the rise throughout the country and the state of Indiana.

Adele Kush knows the heartbreak of suicide all too well.

Her younger brother battled severe depression for years before taking his own life.

“He did kill himself when he turned 23,” Kush said.

She said there were warning signs. His grades dropped and he ran away from home.

Even still her family never imagined he would commit suicide.

“Even though the person has some difficulties you’re never expecting they would kill themselves, so shock for sure,” she said.

Tracy Schneider, the director of the Suicide Prevention Center, experienced a similar loss when her step brother took his life.

It prompted her to help support others who are suicidal as well as their families.

“It’s a really difficult way to lose somebody, and it also puts people at a higher risk themselves for suicide so the suicide prevention center has a support group that we offer for people who have lost someone to suicide so they can so they can meet others who have gone through that experience,” Schneider said.

And in recent years the number of suicides in St. Joseph County have gone up.

“In St. Joseph County, the suicide rates have been anywhere from 25 to 37 in the past two or three years,” Schneider said.

Kush said it is time to end the stigma attached to mental illness and encourage everyone struggling with it to get help.

“We need to talk about it more and its nothing to be ashamed about or anything,” she said.

If you or someone you know are feeling suicidal call the National Suicide Hotline at 1-800-273-TALK (800-273-8255) or visit the St. Joseph County Suicide Prevention Center.