Rochester fire claims one of the tallest buildings in town 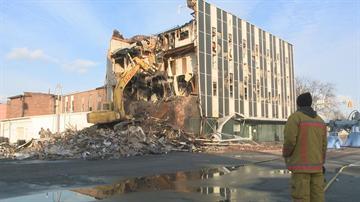 ROCHESTER, Ind. – Every fire department in Fulton County, and even some from other counties, had to be called to put out the flames that tore through one of Rochester’s tallest buildings.  At 12:15 a.m. on Friday fire crews were called to the Centennial Building at 9th and Main, they found the building engulfed in flames.

“We had fire showing on the second floor,” explained Chief Thomas Butler of the Rochester Fire Department.  “The heat was tremendous and we had to back off for the fireman’s safety.”

The fire could be seen all around Rochester.

“I was coming down the street over here and I could see the sky lit up from down the road,” explained Rick Snelling, who lives across the corner from the Centennial Building.  “I get up here and flames were just blazing.”

Eight different fire departments arrived to fight the fire, pouring around 300,000-gallons of water throughout the night.

“We got the fire somewhat knocked down and we tried again to do another interior attack, but we had collapse on the roof,” described Chief Butler.  “We withdrew all the fireman at that time and strictly went to a defensive attack from outside.”

Witnesses described flames shooting out of every window of the four story building.  In his 15-years in Rochester, Chief Butler said he’s never seen a fire like the one Friday morning.

“Not this big,” he explained.  “We’ve done some pre-planning on this and this building here is probably our biggest nightmare here in town.”

The building, which according to some dated back to the 1880’s, had been restructured many times creating a hazardous environment for fire crews.  The building had one fire escape and, aside from the elevator, only one narrow stair case allowed access to the top floors.  Chief Butler said it was almost instantly apparent that the building couldn’t be saved.

“My first reaction was I was hoping that it wouldn’t burn the whole edge of the block down,” explained Rochester Mayor Mark Smiley.

Fire crews climbed onto rooftops of adjacent buildings to keep the flames from burning beyond the Centennial Building.  But, the building itself, a landmark of Rochester, had to be torn down after the flames were put out.

“For public safety the building is being razed, we just can’t afford to leave the building sitting vacant like this,” explained Chief Butler.  “The complete roof was off and we also had interior structure failure inside.”

As he watched heavy equipment tear the building apart section by section, Mayor Smiley said the Centennial Building would be missed.

Some on scene said nearly everyone in Rochester came by the scene to witness the building being torn down.

“This building has been here since our parents were kids,” explained Rick Snelling.

Nobody was hurt in the Friday morning’s fire.  Aside from one office on the ground floor, the Centennial Building was vacant.  As of Friday night most of the building had been demolished.

State Fire Marshals were on scene Friday investigating the fire, but a cause has yet to be determined.