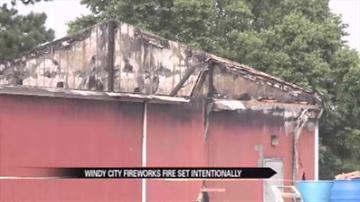 ROCHESTER, Ind.-- ABC 57 was first to bring you a live report of the Windy City Fireworks store fire in Rochester just a few weeks ago. Thursday we learned that fire was set intentionally.

Fireworks used to fill Windy City Fireworks store on 18th Street off US31, rows of them neatly stacked on shelves.

Then on July 17, the fireworks exploded when the building behind the store caught fire.

The investigation revealed the fire was intentionally set.

Now, investigators are willing to pay up to $5,000 to find out who burned Windy City Fireworks to the ground.

“We wish we knew who they were, not only so that they’re caught, but that’s a pretty good reward,” Rochester resident and witness to the fire Stephanie Phillips said.

But will it be good enough to get this small town talking? Residents like Phillips sure hope so. She watched from her home as the nearby business burned, putting lives and their community in danger.

“It’s a little scary. We were talking earlier, to think about whoever that was is still roaming around because who knows what else they could do,” Phillips said.

Several agencies are working this case, including the State Fire Marshal. They all want the person responsible for this dangerous fire caught, and fast.

The fire was extremely dangerous for firefighters and could have turned deadly.

“I’m just glad they were able to get it under control so that nothing else around or none of us had to be evacuated. Hopefully they’re able to catch whoever it is quickly,” Phillips said.

If you have any information about who may have started this fire, you are urged to call the Fulton County Sheriff's Office. ABC 57 reached out to them as well as the Fire Marshal and the ATF, but no one was able to talk about the investigation.