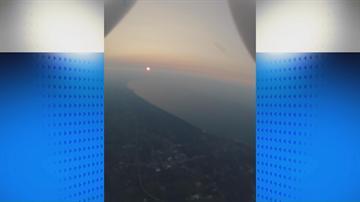 ROLLING PRAIRIE, Ind. – Helen Tibbs stepped out of her home on East Oak Knoll Road early Monday morning to let her dog out and found something very unusual stuck to the fence of her pasture.

“Put in your mind a big snowman, a real huge, huge snowman,” Tibbs described.  “I thought somebody might be pulling a joke.”

The ‘snowman’ was actually three giant balloons and a fourth deflated balloon attached to a large box.  Tibbs called her husband Bob outside and they went to investigate the strange contraption.

"He got looking and there’s a camera and there was this camera attached to it," she explained.  “We took it up to the porch and I wanted to look for a name and he goes don’t, don’t it might be a bomb, I laughed and said, ‘it ain’t a bomb.’”

Encased in a block of styrofoam that had been tied to the balloons was a small Go Pro Hero 2 camera.  ABC 57 has two similar cameras that can be mounted to moving objects or people and set to take pictures at regular intervals.  The Tibbs couldn’t find any name, phone number or address on the camera and decided to call the La Porte County Sheriff’s Department.

The deputy who responded to the Tibbs’s home found that the camera’s battery was dead and took it and the contraption to the department’s headquarters.  When officers opened the camera’s memory card they found 9,999 high altitude pictures showing aerial views of Chicago including Meigs Field, Soldier Field and Navy Pier.

After reviewing the first pictures on the camera detectives determined that the balloon device had been launched by two people from the baseball field of the Phillip D. Armour School in the Bridgeport area of Chicago.  If the balloon traveled in a straight line its journey took it around 55-miles from Chicago to the Tibbs’s pasture.

“From Chicago to here, little old Rolling Prairie,” Helen Tibbs said, laughing with her husband.  “We hope it gets back to the hands that it belongs to and so we'll just see."

La Porte County Sheriff’s Department Detectives have asked school officials in Bridgeport for help identifying who launched the balloon, but so far no leads have turned up.  Anyone with information is asked to call the department at 219.326.7700.